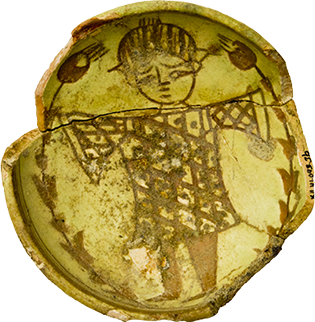 The strongest feature of this period is the fortifications. The excavations conducted in HTP02 since 2009 indicated that the fortification wall encircling the hill, must have been built sometime after the 7th century, possibly in the so-called "Dark Ages" or the "Invasion Period", or in the early part of the middle Byzantine period. The Sasanian and Arab raids into Anatolia resulted in either construction of fortifications at many sites or a shrinkage into fortified areas. In Haldon's list of towns that were raided by the Arabs between 636-740, there are several neighbouring cities; Amaseia, Neokaesareia, Euchaita and Sebastea. Although the sources do not mention Komana among those settlements that were directly impacted by the invasions, it is sensible to suppose that Komana must have been threatened by the raids and possibly even devastated in terms of resources considering the general agricultural wealth of the land. Fortified settlements are fairly common in the middle Byzantine period. Gritille and Çadırhöyük are among the examples.

In the last two years of excavations it has become clear that the fortifications could be dated to later part of early Byzantine period and that they have enclosed a group of buildings, functions of which are still not clear. These buildings have mortared walls some of which stand as high as app. 2 m. As with the rest of the buildings of the previous phases, the orientation of the walls is slightly northwest-southeast. These walls are built with irregular shaped field stones and a greyish mortar resembling the mortar in the fortifications. The walls extend all the way underneath both churches and come very close to the fortifications on the east side. In 277/623 three very large pithoi which can be associated with these buildings were discovered.

Most work has concentrated on the northwest corner and north side of the hill. So far a small section on the east (c.10 m), the complete northwest corner and around 25 m of the northern section was uncovered. Excavations extended both into the walls and out. The walls are built of irregular field stones, spolia, and mortar. The thickness of the wall is app. 2,5 m on the east and northeast side but slightly narrower on the north (1,65 m). Although the walls stand up to 2,5-3 m at places, the amount of collapsed wall material suggest they must have been much higher originally.

The wall foundations on this side of the site sits exclusively on the bedrock. Before the plain was filled with alluvial deposit, the rock outcrop must have been visible and much steeper providing further defense for the fort. Small scale excavations were also conducted on the northeast corner of the hill and the fortifications could be followed there as well. The discoveries on the northeast section suggests a more confined wall than assumed before. The walls must have encircled the most upper level of the hill using the bedrock as a guide.

On the northwest and northeast corners, round towers were discovered. Only the foundations of these towers are recovered due to heavy weathering. The northwest tower measures app. 5,5 m by 6,5 m. This tower is heavily damaged by the erection of a telephone pole right in its middle. At the northern edge of the tower the wall makes a turn towards the east running on the bedrock for 6,6 m at which point it turns to the south. There is an extension here to the south which is 10 m long. At the end of the 10 m, the wall once again turns east. A wall of same thickness exists (6 m), then a thinner wall continues to the east for another 6 m. At this point the wall is lost. This extension to the south and east resemble remains of a gate. The northern fortification wall is revealed to the east of this feature, creating the eastern corner of the gate. Inside this L shaped feature, at around 2 m towards the south a wall connects the NS wall to the northern fortification. Here, a threshold built of spolia was discovered. This entry which is over 1 m above the bedrock must have been an earlier gateway into the fort. Its level may suggest that this was a later addition.

In 2018, a street surface made of pebbles, larger stones, packed earth and mortar was uncovered. This street begins with the threshold and continues into the citadel as a soft ramp curving towards the east. The rectangular gate structure is incomplete at the moment however, it may be suggested that the gates main entry was from the east leading to the street on the south creating an indirect and protected entrance.

The excavations continued in the gate in 2017-18 and for the first time on the exterior section of the wall, A gold coin together with a glass weight were found on the southeast corner, by the wall. The coin is a Phocas (602-610) tremissis which dates to the 7th century. This may represent a post quem date for the fortifications.
copyright 2021 karp